This image was shot during a winter’s walk along St. Annes beach with a friend but, despite being one of my all-time favourite beachcoming shots, it almost didn’t happen.

[This image was first published on chromasia on December 28th, 2005]

Up until I took this image all my beachcombing shots were of items I found on the beach, as I found them – washed up flip-flops, shoes, water bottles, tyres, cans, shells, and various other bits of flotsam and jetsam. It wasn’t a rule, but it seemed to me that shooting things as I found them was more authentic than staging the scene in some way, and up until this point it hadn’t been an issue. 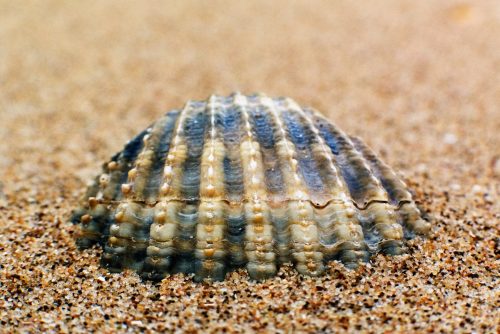 In this instance though we had a problem. We found a really photogenic TV stuck in a sand dune and no matter what we tried we couldn’t get a decent shot. The light was wrong, and the background was boring. So after a bit of deliberation we decided to move it a few yards down the beach.

Everything was looking good, right up until the point I tried to take a shot: my battery had died. John (the friend I mentioned above) had taken quite a few shots by this point, and as we’d been walking for hours, it was late, we were hungry and so on, I almost gave up …

“John, can I borrow your camera?”

We swapped CF cards, I took a bunch of shots, and then we wandered home. I can’t remember a single other thing we shot that day, but I do remember the pleasure I felt when I opened this RAW file – it was definitely worth the effort.